The team had 17 members made up of students and apprentices from Northern Lights College attending Dawson Creek or Fort St John campus or via online courses. NLC the only post secondary institution in BC with a rodeo team. They competed against six other college and university teams in the Canadian College Rodeo Circuit and had the privilege of entering at least 10 contestants in eight competitions.

Traditionally each season hosts 10 rodeos where all competitors strive to qualify for the Canadian College Finals Rodeo (CFFR). On May 5, 2022 Northern Lights College announced 10 members of their team who qualified as finalists for the 2022 CCFR event that took place May 19-21, 2022. They also announced that Northern Lights College will host the first ever Canadian College Rodeo in BC, coming fall of 2022. 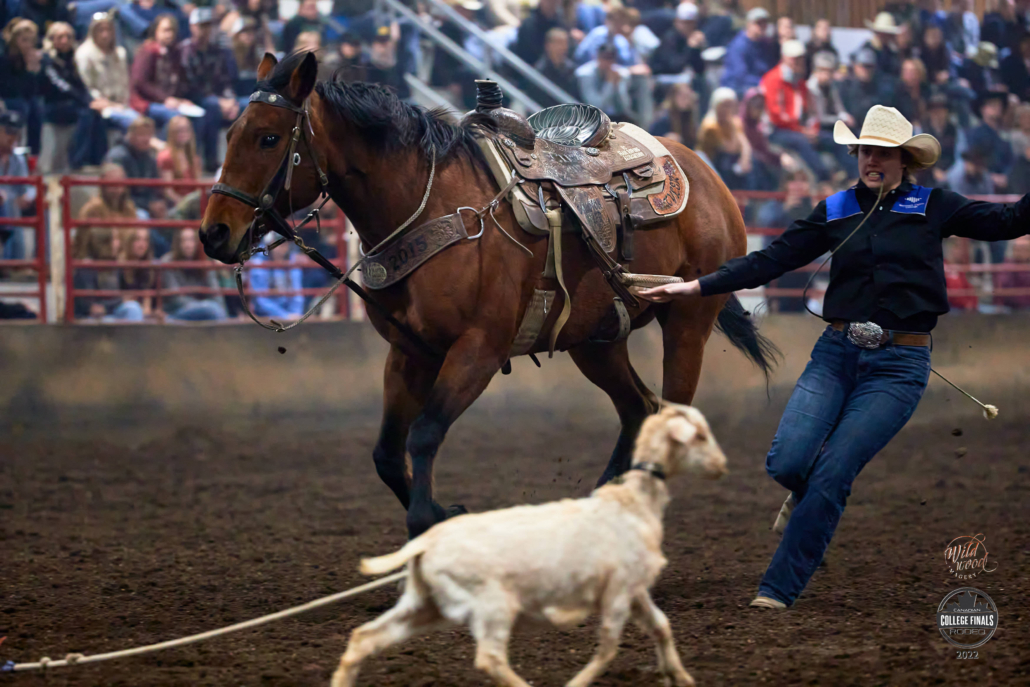 Here are some of the finalists, and their results at the CCFR:

Aspen is part of the Social Worker Diploma program at NLC in Dawson Creek. She was Season Leader in Pole Bending, and has earned the most points over the rodeos this season in that event. Going into the finals those points were dropped and the athletes started from zero again. In round 1, Aspen was in 2nd place, round 2 she was in 3rd, and in round 3 she placed 1st with an amazing time of 20.639 seconds. As the highest point earner at the finals, she was awarded the Canadian College Championship title and buckle for Pole Bending.

Bryce is part of the Carpentry Foundations program at NLC in Dawson Creek. Bryce was in two events at the CCFR. He was a header in Team Roping and also entered as a Tie Down Roper. It was in Tie Down Roping that it all came together for him by getting all three calves roped and winning round 3 with a fast 11.4-second run. His points in this event earned him the Canadian College Championship title and buckle for Tie Down Roping.

Kevin took his plumbing trade courses at NLC. He is a practicing plumbing apprentice, looking to take his Level 3 training. Kevin placed 2nd in round 1 and 1st in round 2 with a 12-second run. His top placings over the first two runs held him overall, and he was named the Canadian College Champion Steer Wrestler.

Keaton takes courses online for early childhood education at NLC. She has been on the team for a couple of years and qualified in Team Roping and Breakaway Roping. It was her Breakaway Roping that brought her biggest success in the finals. Round 1 was a 6.35-second run, round 2 was a 3.32 for 3rd place and round 3 was 6.53 for 4th place. After taking the total overall points and running the average, Keaton was named the Reserve Champion in Breakaway Roping.

Tyler is in a Business Management Certificate course at NLC. She is a very consistent goat tier with a fast running dismount and fast hands on the ground. At the CCFR, she had a 9.2 second run in round 1 for a three-way tie for first place. In round 2 she placed 3rd and round 3 she was 2nd. This great average earned her the Reserve Champion title in Goat Tying.

We are so proud of all of the athletes who compete and continue to grow at Northern Lights College. As the only post-secondary institution in BC with a rodeo team, NLC is committed to giving young student athletes every opportunity to succeed not only in the rodeo arena but in continuing their post secondary education.

For more information on NLC and the rodeo team, click here!